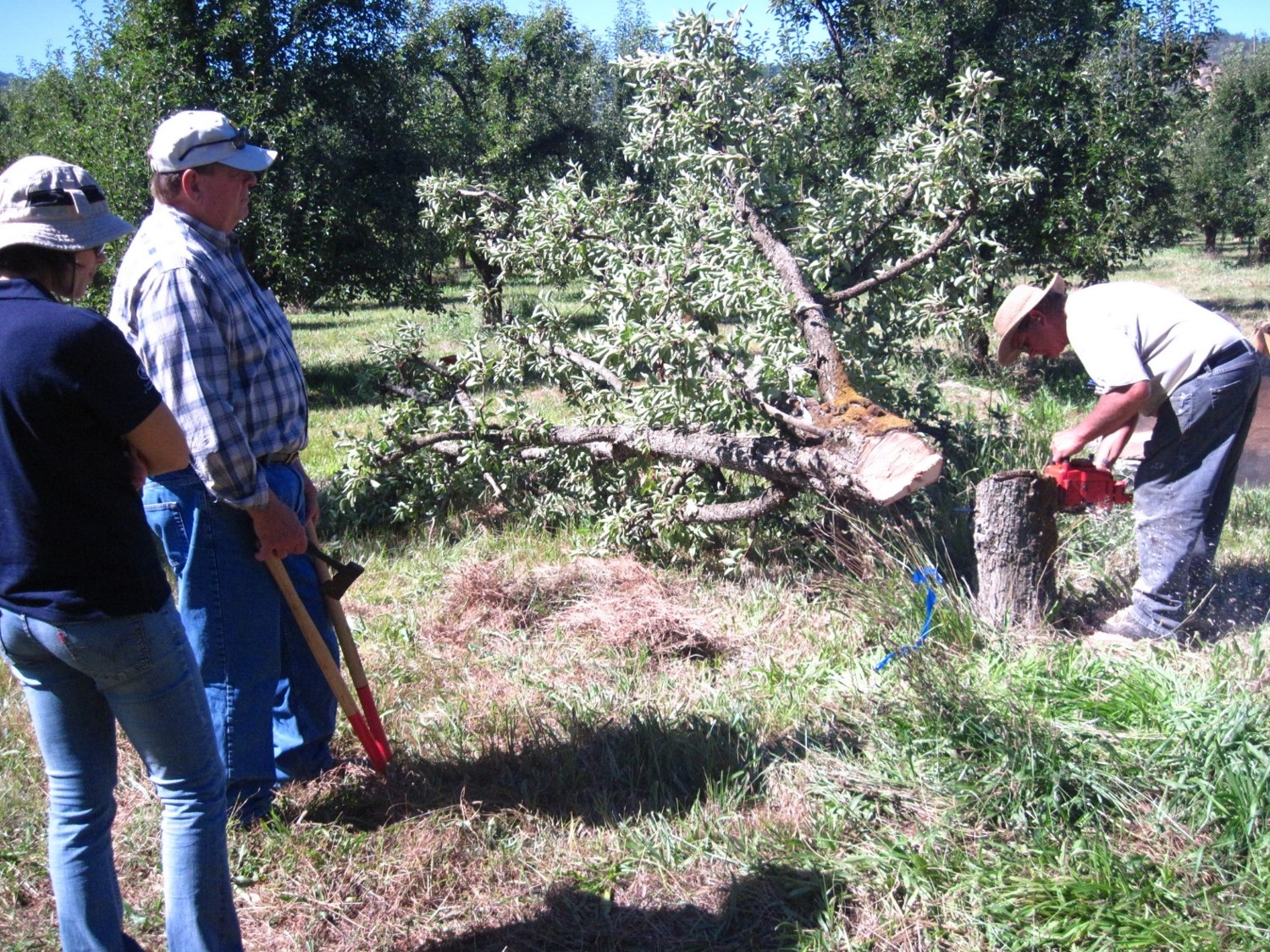 California produces 26% of the United States pear crop on approximately 5,600 ha. A survey of seven northern California pear orchards (Pyrus communis cv. Bartlett) in summer 2010 revealed the presence of wedge-shaped cankers on 2- to 5-cm diameter branches, equating to 1- to 3-year-old wood. Many of the observed cankers occurred near pruning wounds, and there was decreased foliation on infected branches. Infected wood was surface disinfected with 95% ethanol and briefly flamed. After removing bark, small sections of diseased tissue were plated onto 4% potato dextrose agar (PDA) amended with 0.01% tetracycline and placed on the lab bench at 22C until fungal growth emerged. Fungal colonies that were consistently isolated were transferred to fresh PDA using hyphal tip isolation. Fungal colonies were dark brown to gray with aerial mycelium and formed pycnidia after 15 days of incubation at 22C. Conidia were brown, oval to oblong, and measured (16.5-) 20 to 24 (-26) x (7.5) 8.75 to 11 (-12.5) um (n = 50). DNA from 14- to 21-day-old colonies was extracted and sequences of the rDNA internal transcribed spacer region and part of the beta-tubulin gene were amplified using primers ITS4/ITS5 and Bt2a/Bt2b, respectively (2). The DNA sequences of fungal isolates from California showed 99 to 100% homology with the ex-type Diplodia seriata De Not. (1) CBS112555 deposited in GenBank. DNA sequences from three California isolates were submitted to GenBank with accession numbers KC937062, KC937065, KF481957, KF481598, KF481959, and KF481960. Pathogenicity tests were performed in March 2011 on 3-year-old Bartlett pear trees planted at an experimental farm in Davis, CA. A single, circular, 2-cm pruning wound at the top of the trunk was inoculated on each of three single-tree replications using 2-cm mycelial plugs from 14-day-old colonies growing on PDA. After inoculation, mycelial plugs were covered and sealed with Parafilm and aluminum foil for the duration of the trial. Three control trees were inoculated using sterile PDA plugs. Twelve months after inoculation, UCD103 and UCD105 were consistently re-isolated from the margin between necrotic and healthy tissue using the same methods described for the original isolation, and UCD102 was re-isolated in two out of three plants. The average lesion lengths of UCD102, UCD103, UCD105, and control plants were 12.5, 17.3, 23, and 1 mm, respectively. Control lesions were short and sterile, and seemed to be a physiological reaction from the plant. A second pathogenicity test was completed in 5 months beginning in June 2012. UCD105 was consistently re-isolated, and UCD102 and UCD103 were re-isolated in two out of three plants. The average lesion lengths for UCD102, UCD103, UCD105, and control plants were 2, 3, 5, and 1 mm, respectively. Compared to grapevine (Vitis vinifera), the pathogen grows more slowly in pear tissue under natural conditions. To our knowledge, this is the first report describing D. seriata as a causal agent of pear branch canker in California. Canker diseases can reduce the lifespan of perennial plants, ultimately leading to long term economic losses for growers (3).